Imagining How Planned Parenthood Might Respond to Gosnell – Trevin Wax:

From Roe to Gosnell - WSJ.com

here is a necessary follow-up article to my last post a couple hours ago.  This one is longer, and WELL WORTH the read.

Best of the Web Today: From Roe to Gosnell - WSJ.com:

The Abort73 Blog: What Would Planned Parenthood Say About Katie Stockton?

I normally reserve my blog for specific ministry related events, but I cannot help but share some of the recent events regarding Planned Parenthood, abortion & infanticide.

If you are not aware of this issue, I plead with you to take notice.  Planned Parenthood, the world's largest abortion provider, is literally arguing that infanticide should be legal.


"Testifying against a Florida bill that would require abortionists to provide emergency medical care to an infant who survives an abortion, Planned Parenthood lobbyist Alisa LaPolt Snow was asked point blank: “If a baby is born on a table as a result of a botched abortion, what would Planned Parenthood want to have happen [emphasis mine] to that child that is struggling for life?” She replied: “We believe that any decision that’s made should be left up to [emphasis mine] the woman, her family, and the physician.”Jaws in the committee room dropped. Asked again, she repeated her answer.
Only after a firestorm erupted in the conservative media did Planned Parenthood issued a statement that in the “extremely unlikely and highly unusual” event that a baby were born alive it would “provide appropriate care to both the woman and the infant.” That is debatable, since a Planned Parenthood counselor has been caught on tape admitting that the organization leaves infants born alive after an abortion to die. But if Planned Parenthood really does provide such care, why was it lobbying against a bill requiring such care in the first place?"

This is unfortunately only almost unbelievable...almost.  Again, just to emphasize this, what exactly does Miss Snow's response mean?
Let me restate it in my own summary form.  Please consider if this is an accurate representation:
Pannel member: "When a baby is born alive, what do you, as a representative of the largest provider of abortion America, want policy to be regarding that child?
Snow: "We believe that policy should be that it is legal to destroy that child if the mother or abortionist choose to do so."
Is this not accurate?  Is this not what "any decision that’s made should be left up to the woman, her family, and the physician" means?  It is clothed in the well-known language of choice and freedom, but logically, in argument form, what is she saying?  She is saying that Planned Parenthood desires for it to remain legal to kill that child who is now alive outside the womb, as apposed to inside of it.
Katie Stockton (quote below) is literally going to serve 50 years in prison because she did virtually the exact same thing. At the same time, Planned Parenthood is standing in front of a state legislative meeting apposing a bill that would protect that baby born alive.


Another excerpt, this time from an article form Abort73.com

Posted by Lukecp at 9:03 PM No comments: 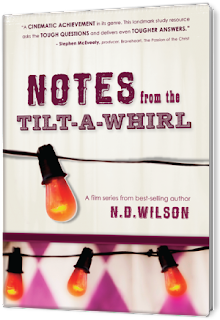 Equip was snowed out the other night. So instead, we moved onto campus and watched a film called "Notes from the Tilt-A-Whirl". (website here)
I'd highly recommend it. It's an incredibly thought provoking, entertaining, cinemagraphic piece I work. It is a most helpful conversation tool, and God blessed our discussion afterward.

During the film, the author (Nate Wilson) says, "Gardens are Graveyards".  It was right before (or after) he just got done choking up about his buried 1 year-old niece   He regains himself and teaches how, for a Christian, a graveyard is actually a garden, because God says he is going to resurrect the dead one day.

So reflect upon Jesus next time you see a graveyard.  Be sad, weep with those who weep and do not celebrate death.  But, be careful to not let your sadness triumph over your joy, because we know that one day that graveyard will bring forth the fruit that is buried there.


Watch the video trailer here, too.

Posted by Lukecp at 9:24 PM No comments: