At risk of blogging too much, I can't help but point you to various resources about Pro-life issues.
I've been reading articles and watching some videos on the website abort73.com again.
There is some really disturbing and convicting material on this website, and I encourage you to please take 15 minutes and watch a couple of their primary videos.
I have virtually always called myself "pro-life". However, for a very long time I was what I call "apathetically pro-life", which I think is an oximoronic term. To be apathetic about the death of unborn children is equivalent to not being pro-life at all. So please, take some time to view the content of this website and see if you are not affected by what you find there.
As William Wilberforce said,
"Having seen all this you can choose to look the other way, but you can never say again,
‘I did not know.’"
Posted by Lukecp at 1:01 PM No comments: 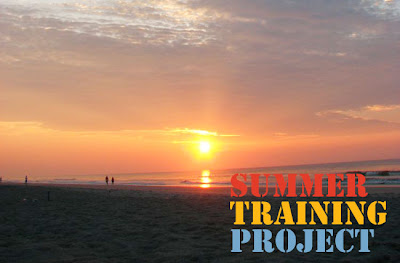 Summer Training Project
This will be the second summer that we are inviting and encouraging students to attend "Summer Training Project" (STP). Last summer was the first, and it proved to be an extremely fruitful two months for the students that went.
In a (very small) nutshell, STP is two months of consistent Christian community, teaching, working, thinking, evangelism and loving one another. The students live with and work with three other students the entire time. The experience is one of the most fun and most benifical things that they can choose to do with their summer.
So, please pray for Equippers for this summer. Pray that God would bring many students along this summer, and that they would be mightily build up in the Lord as a result. So far, there are only a small handful who have applied, but I'm waiting and praying that we would have as many as 15 come this summer!
Posted by Lukecp at 12:40 PM No comments:

"And God saw everything that he had made, and behold, it was very good." Genesis 1:31
A CRUCIAL theological doctrine for us as Christians is the 'doctrine of creation'. This doctrine is not something about what we believe about evolution and the age of the Earth (although that might be connected). No, it is far more important and central to how we view this world and the things in it.
The doctrine of Creation basically says that everything in this world, at its core, is good.
Why is this crucial to our faith? Well, I'm glad you asked.
This is crucial because it (should) dictate our view on virtually every created thing that we have...which is everything. For instance, it applies to drama, story telling, entertainment and enjoyment. More specifically, it applies to Films/movies. Movies are nothing more than stories being told. Movies have effectively replaced the stage that stories used to be told on (they still are, but much less compared to the modern day cinema).
So the question a Christian should ask is, "Is it right and God-honoring for me to watch a movie?". Again, good question, thank you for asking it.
The answer, of course, depends. It depends on what is being done and what is being told. A movie with a clear exaltation of immorality in the vien of nudity or something similar might be virtually impossible for a Christian to watch and still be edified and glorifying to God.
This is often the case, and consequently I would argue there are many many films that Christians simply should not watch. However, here is the important point to be made: films are, at their root, stories being told for a particular purpose. Stories and drama and entertainment are, at their root, created by God and are therefore good. We humans simply are bent towards perverting them. But we are perverting something that is first good...then is perverted in various ways. The same can be said for virtually all forms of drama and story telling. So, at risk of trying to say too much, I will simply say that as Christians, our approach towards movies should not be to "avoid" them, nor to completely "embrace" them, but rather to "redeem" them. Lets consider them in light that all things are created by God. Lets approach them in light of the fact that God desires for us to enjoy story, and that all stories are ultimately a reflection of the story of redemption that God has placed us in.
In the book "The Screwtape Letters", C.S. Lewis teaches about created pleasures. Through the mouths of a demon (in the book), Lewis explains how it is been God ("The Enemy", in the view of the demons) who created all pleasure, and all Satan has been able to do is distort and pervert them.
“Never forget that when we [demons] are dealing with any pleasure in its healthy and normal and satisfying form, we are, in a sense, on the Enemy’s [God's] ground. I know we have won many a soul through pleasure. All the same, it is His invention, not ours. He made the pleasures: all our research so far has not enabled us to produce one. All we can do is to encourage the humans to take the pleasures which our Enemy [God] has produced, at times, or in ways, or in degrees, which He has forbidden.” -The Demon 'Screwtape' - In the Screwtape Letters.
Why talk about all of this? Because it is fun...and, because we are currently starting to watch some films. We call them "Film and Theology", which isn't our idea, we stole it from Mars Hill, which is the only ones we are picking from at the moment.
We watch a movie, then spend a good hour discussing the themes, characters and plot. Most importantly, we discuss it from a Christian worldview. Where the film makers go astray, where they seem to be accurately reflecting truth, where the gospel answers rightly when man's opinion answers wrongly, etc.
Please pray for these times, and pray that equippers would be bringing their unbelieving friends. These times can serve as a terrific opportunity to discuss God and the gospel further.
Posted by Lukecp at 11:39 AM 3 comments:

Off for our Spring Leadership Recruitment/Training

The past couple years, we have taken a group of current leadership and a bunch of new potential leaders for the next year. This weekend is that weekend, and I'm very excited!
This year, by the grace of our God, we have over 20 people coming! That is something like double what it was last year.
We will be spending 1/3 of our time doing some theology teaching, 1/3 of our time doing some practical ministry training, then some odds and ends with students teaching about "Taking Initiative", "Personality Text", "Time Management", "Expectations of an Equip Leader" and then simply spending a good amount of time hanging out and having some fun together.
This weekend has proven to be an important part of the preparation for next year, as many new students are introduced to the concept of serving their peers in a much more intense and intentional way.
Thanks!
Luke
Posted by Lukecp at 12:05 PM No comments:

If you are unfamiliar with the phrase "Christian Hedonism", this short article might just be the start of some worldview altering concepts for you. It has been for me.