Relationships with the Opposite Sex - Searching for Clarity

Two Wednesday ago I preached on this.  I actually preached on it the night before as well, Tuesday night at Equip-USD and then the next night up here.  I thought it went well at USD, felt genuine God-given conviction and passion, and it seemed to be clear and helpful.  I didn't exactly feel that way up here, but, as these things go, I left that in God's hands.  Feeling passionate or perceiving myself to be speaking with clarity, although desirable and good, are not the measure of success or faithfulness in the preaching of God's truth.

And, as these things happen, God sees fit to remind me of this truth in stronger ways from time to time, like when I don't think I do a good job but in fact God uses that time especially to convict and persuade.
Which is what has apparently happened with several people.  It's good to hear good feedback sometimes, students telling me this or that that was helpful or convicting, and I'm always grateful to God for allowing me to hear such things.

However, I don't believe I've ever heard "I'm getting married in December because of what you said on Wednesday."  That is a first.  It's certainly among the scariest feedback I've heard.  She did clarify, after I pushed in a bit, that they'd been engaged but were planning to wait for another year until she graduated, but decided waiting that long wasn't wise, based on some of what I said the other night.  So, let's pray 1) what I taught was in fact true, and 2) she didn't misunderstand me.  :)

If anyone ever tells you that words aren't powerful in changing peoples lives, don't believe them. Words have power, and we have an awful responsibility to make sure our words are the words God would have us believe and say.

Oh also...an Equip regular also decided that the pseudu-lationship he had with his lady-friend needed urgent clarity after the same message.  We met to discuss it a few days ago, and hopefully he's on the right track, too.

This isn't the report of Fall Retreat, but it is a taste of it...you could say its an hors d'oeuvre.

In brief, it was a really good time.  God was kind to us in preaching and fellowship and the students seemed to have a good time on top of that.

Jonathan Land, a friend and pastor of Connection Church was our guest preacher and we were very blessed to have him! 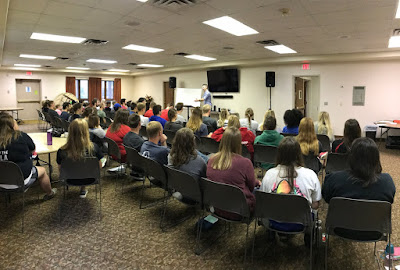 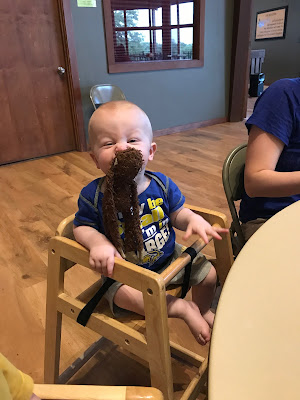 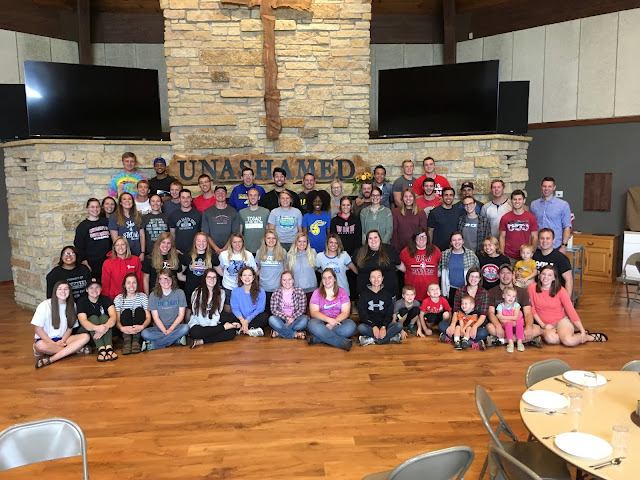 Posted by Lukecp at 7:37 PM No comments:

So for the purposes of this entry I won't go into the details of how or why having larger numbers can be both a good thing and a difficult thing.  But, I'll simply report that God has seen fit to start us off with a bang.  The Student Engagement Expo yesterday was great, we had 350+ students fill out spiritual interest surveys.  That's more than double what we're used to.  So praise God for that, and this evening was probably the largest BBQ we've ever had, somewhere around 200+ students came, and many stayed around and played games and talked for many hours afterward.  Quite a few I spoke to were interested in coming to our large group  meeting where I'll share the gospel in more depth than what I did tonight.  But the gospel presentation tonight was clear and concise, as far as I could tell.
PLEASE PRAY for Wednesdays meeting, as I'll explore it far more and there will be a great deal of opportunity to interact with students more, set up times to meet and share the gospel in person for me and the leaders, and for Bible studies to be populated.  (You can sign up very specifically to pray, please consider doing that). 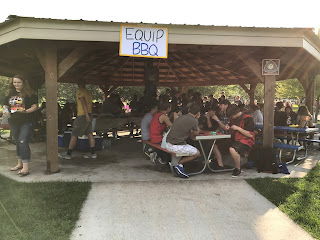 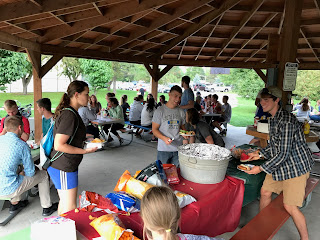 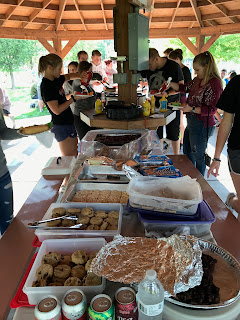 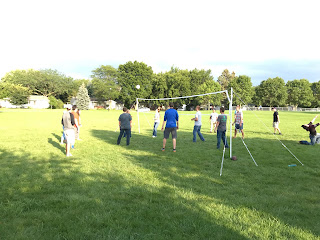 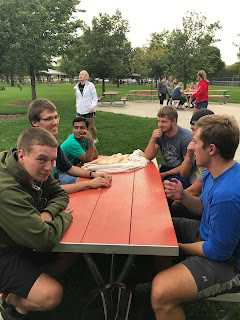 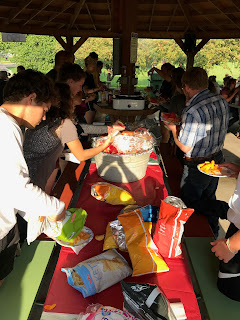 Posted by Lukecp at 9:19 PM No comments:


Once the flood starts, it doesn't dry up for a few weeks, which means lots of paddling to just stay afloat...but while we float, God is granting a bunch of ministry opportunities, especially for the 2k+ scared and wandering freshmen.

So, this post is mostly to ask for prayer.  I've put together a Prayer Volunteer form to get as serious and ordered as possible.  Would you please check it out and consider really laboring with us in prayer this semester?

Summer has quickly progressed, and we're already several hundred new incoming freshmen students during NSO (New Student Orientation).
It's proven to be a pretty significant time for us to do outreach and recruitment, especially for the Fall semester.

Adam, one of our student leaders, has been helping me man the booth at each of them, and Sydney has begun to help as well.

Please pray that God would grant us fruit at these.  The goal is to get an many contacts as possible, so that we can then follow up with as many of them as possible later on, especially once they arrive in the Fall.  Pray we'd get may names, but also pray that God would also grant a number of more personal interactions as well. 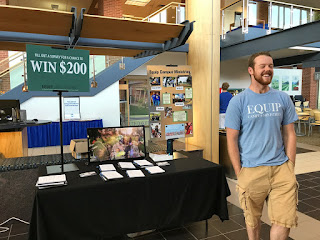 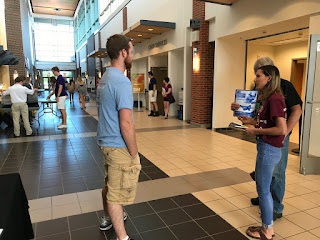 Posted by Lukecp at 8:10 AM No comments: 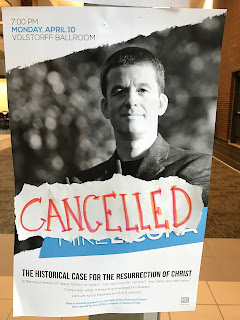 [21] Many are the plans in the mind of a man,
but it is the purpose of the LORD that will stand.

Such as, the plans we made for the past few months to bring in Dr. Mike Licona, something of an expert in the field of "historical Jesus" research and especially with the historical argument for the resurrection of Jesus.  (Here's his website.  Here's his monster tome on the resurrection (it's very good).  Here's a very shortened version of the book, he coauthored with Gary Habermas.)

We'd spent what probably amounted to hundreds of hours preparing to bring him in, put up a couple hundred posters, passed out a couple hundred flyers, facebook advertising, lots of phone calls and lots of time...then, Delta cancelled his flight and it all went downhill.  We ended up simply canceling the event, and whoever didn't hear about it joined us for a couple hours in a small room in the union watching one of his lectures, instead.  For what it was, it was a good time.  We ate our fill of cheese and crackers (which were enough for like 150 people, not 30), enjoyed the lecture and did our own Q&A after it.  (I'm familiar with the content, and Mike Berhow, a friend, is considerably more familiar, so it was a good time).

So, why did it happen this way?  The short answer is Proverb 19:21.  The shorter and less helpful answer is "I don't know".  But, perhaps next year! 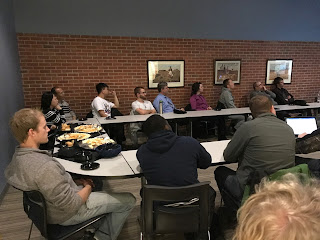 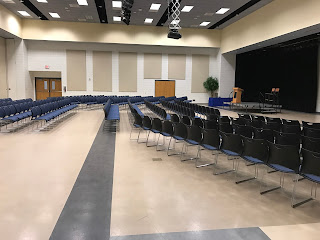 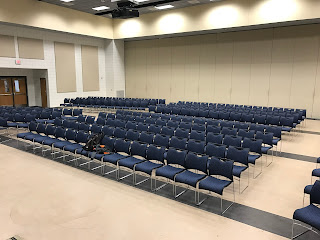 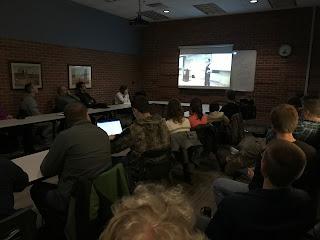 Posted by Lukecp at 7:51 AM No comments:

Just thought I'd throw up an update on the boys.

Asher is almost 2, and Lewis is nearly 7months. 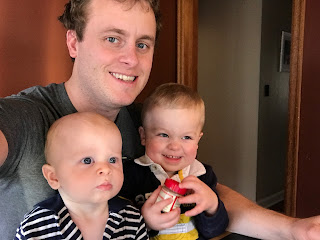 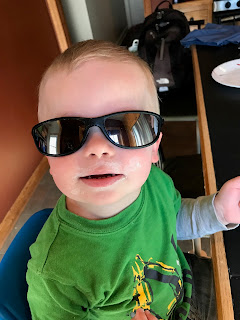 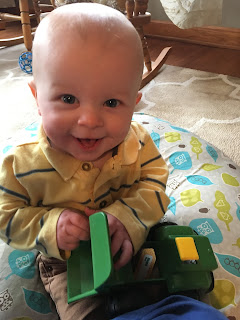 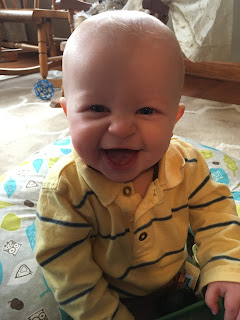 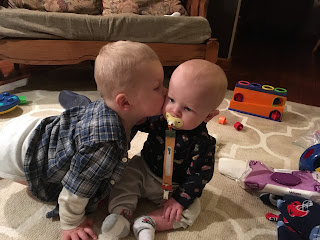 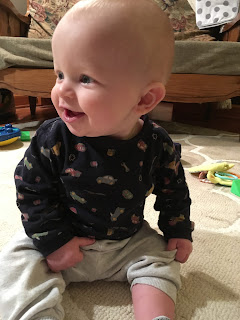 Posted by Lukecp at 7:05 PM No comments:

It was a great time over all.  It's really packed with lots of teaching, from all morning on Saturday going through some important theological issues, to the how of ministry (discipleship, mostly), and some other distinctives (local church, etc.).

We had about 35 of us there, and for the first tie ever, we had two campuses, as we joined with USD! 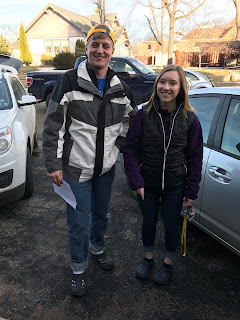 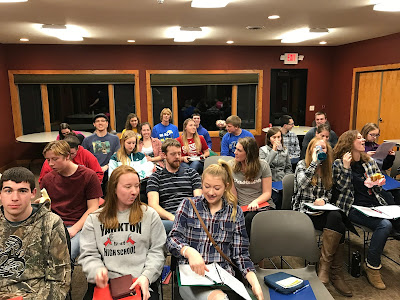 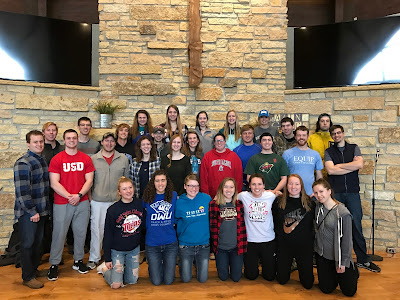 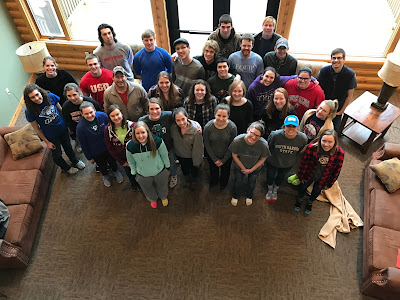 Posted by Lukecp at 6:50 PM No comments:

May I highlight a few things, in very close succession?  Does it still count as faithfully blogging about ministry stuff? (no)

But, I'm going to do it anyway, and try and catch y'all up on a few things that have been going on these past couple of weeks.

So....
This week, I spoke at two Equip meetings.  One was our USD location (Vermillion), down where Brandon is.  I redid a message from James, and then last night we continued forward in James 2:1-13, entitled "Show Me Your Faith by being Impartial like God".

Here is the group down as USD: 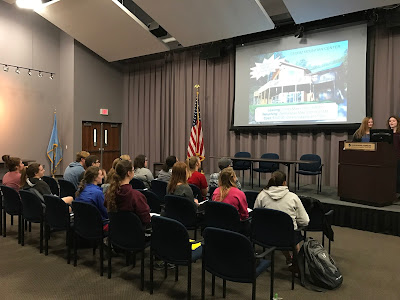 Posted by Lukecp at 6:27 PM No comments:

Off and running, already parched

Just a quick note to check in.

We are now on our third Wednesday night large group of this 2017 Spring semester.  What?! 3rd!? Yes, the third week is upon us.  It has been a good start, though.  I've been really digging our series "Show Me Your Faith" - which is just the book of James.  I'm hoping to get "all" the way through the book, and so far we're on track.  Tonight's message is "Show me Your Faith by Hearing and Doing the Word", from James 1:19-27.  Last week was "Show me Your Faith by Desiring Divine Reward" from 1:12-18, and the first week from "Show me Your Faith by Counting it All Joy", from 1:1-11.

Anyway, we've had a men's and women's event already (concurrently), which the guys basically just hung out a bit and then spent an hour or more reading this article, "The Complicated Life of Lazy Boys".  I'd read it a couple times before.  It was a very good discussion, with what felt like some legitimate conviction from some of them.

As the title hints at, I already feel like I'm a bit tired.  I think this is in part because the last 1.5 weeks was really packed.  I spoke at Equip on Wednesday,preached on Sunday at Church, I taught the next day at Ratio Christi, and I speak tonight at Equip.  It feels like a lot...perhaps I'm starting to feel Brandon being gone more than last semester.  But, it's been good, and God has blessed the teaching and preaching.

Emma and I are headed to Bethlehem's Pastors Conference this coming Sunday night through Wednesday, which we are both very eager for.

Please keep us in your prayers, especially for a faithful perseverance this semester.
Posted by Lukecp at 7:19 AM No comments:

I'm about to sit in the Student Union for 2-4 hours for our "Free Book Friday" dealio.

Today's book is "Transgender".  The title of this post communicates just how terribly confused our culture is.  At one point, Facebook listed something like 77 options of gender, and now I believe lets you choose from an infinite list...or rather, you can type in literally anything you want to describe "your gender".

So, this topic is, to put it lightly, an important one.   And unfortunately, my generation (especially) has virtually no idea what they think about all of this.  We are an incredibly confused people. 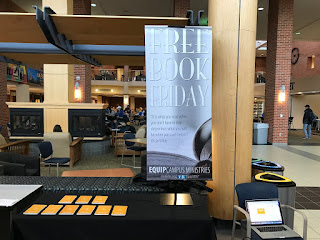 So, I'm hoping to distribute a few books today and ask that God would do great things so such a small effort.

Posted by Lukecp at 9:01 AM No comments: